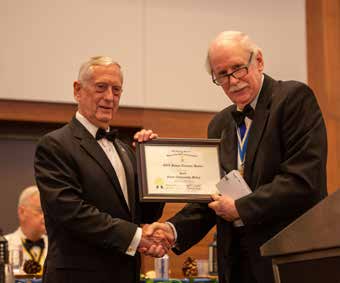 There were many highlights at the recent 131st Annual SAR Congress, but the pinnacle event was the induction of retired four-star General James N. Mattis, USMC, into our society. And while that event is notable news in and of itself, the way it occurred is an extraordinary story.

As those who attended the 131st Congress know, Gen. Mattis was the keynote speaker at the President General’s Banquet on Tuesday evening, July 13, held in the Grand Ballroom of the Hyatt-Regency Lake Washington Hotel.

Gen. Mattis, a resident of Eastern Washington, had a distinguished 40-year military career that included directing the military operations of more than 200,000 American and Allied troops in the Middle East. Following his retirement from uniformed military service, he served as the 26th Secretary of Defense of the United States of America. The fact that Gen. Mattis is widely known, respected, and admired by those in uniform and among our thousands of compatriots is an understatement. From the moment Gen. Mattis set foot in the hotel lobby, he was besieged by well-wishers who wanted to shake his hand, have a photo taken with him, and thank him for his extraordinary service to our country. Following dinner, Gen. Mattis was introduced to a standing ovation and delivered one of the most inspirational talks our society has heard. In his speech, written specifically for the occasion, Gen. Mattis reminded us of our revolutionary roots and the raw courage and extreme sacrifice of our Patriot Ancestors; recognized the many military veterans among us who continued the tradition of sacrifice and service for their Nation; and thanked all compatriots for the time and resources our society expends to keep alive our valued traditions, primarily through teaching in classrooms and recognizing our youth. You could hear a pin drop during his remarks because of the rapt attention of every person in the room, and another extended standing ovation followed his talk. President General Jack Manning thanked General Mattis on behalf of the SAR and presented tokens of appreciation. The evening could have ended there, but there was one more surprise in store.

On a couple of occasions during his remarks, Gen. Mattis lamented that he did not have a Patriot Ancestor, unlike us attending Congress. Little did he know that the Washington Society had surreptitiously put some of its best genealogists to work a few months earlier researching his lineage. They hit pay dirt, finding that General Mattis did indeed have a Patriot Ancestor—Private Aaron Whitaker, who served with the Washington County Pennsylvania Militia in 1782. The Washington Society promptly prepared an application and forwarded it to Louisville. The Genealogy Department verified the lineage and approved the application without Gen. Mattis’ signature to preserve the surprise. Accordingly, following the presentation of the thank-you memento, President General Manning commented that there was one more piece of business to conduct, and then shocked Gen. Mattis and the audience by announcing that Gen. Mattis would, then and there, be inducted into the SAR. The audience spontaneously leaped to its feet with the loudest ovation of the evening, and Gen. Mattis was speechless—truly surprised by the news that he had a Patriot Ancestor. PG Manning then asked Gen. Mattis to raise his right hand and inducted him as our newest compatriot. It was a magical moment, with many audience members having lumps in their throats and tears of joy in their eyes.

Welcome to the SAR, Compatriot James N. Mattis! We are honored to have Gen. Mattis as one of our own. No one could better represent the values for which our Society stands, nor better appreciate the heritage represented by our original military veterans who fought in the Revolutionary War. Tuesday, July 13, was a memorable evening for both Gen. Mattis and the SAR—an evening those attending the President General’s Banquet will likely not forget.