The library will be CLOSED FROM JULY 5TH THROUGH THE 20TH DUE TO CONSTRUCTION, and because of this, we will also be closed on Saturday, July 17th.

*In cases of inclement weather, the library and headquarters follow the University of Louisville schedule.

Located along Main Street’s Museum Row in downtown Louisville, the Sons of the American Revolution is the leading male lineage society that perpetuates the ideals of the war for independence. As a patriotic, historical, and educational non-profit corporation, it seeks to maintain and expand the meaning of patriotism, respect for our national symbols, the value of American citizenship, and the unifying force of “e pluribus unum” that was created from the people of many nations.

The historical buildings themselves, housing the SAR’s administrative offices, Library, and Center Gallery, showcase a cast iron façade in the Modified Renaissance Revival style prevalent in American architecture in the late nineteenth century. The Soho district in New York City is the only place in the United States with more cast iron façades than Louisville’s Main Street. The warehouse (located from 803 to 807 West Main Street) was occupied in the early years by a variety of tobacco brokers, including the Kentucky Tobacco Company. In the early twentieth century, its use had switched to grocery and coffee storage. 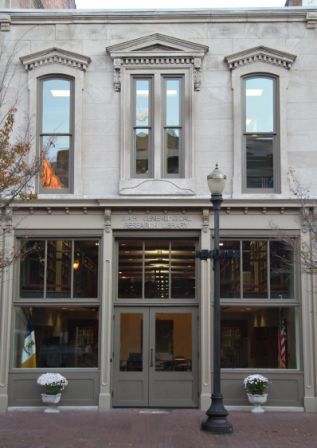 While Kentucky was not a cotton-growing state, the Brandeis & Sanders Building (located at 809 West Main Street) was a testament to the importance of the Ohio River for transportation, and Louisville as a distribution point, for the southern cotton commodity trade. On March 27, 1890, a class-4 tornado came through Louisville and heavily damaged the 800 block of Main Street. The Kentucky Tobacco Warehouse was “completely wrecked with the exception of a part of the front and back walls,” according to the March 29 Louisville Commercial, and the top two floors were never reconstructed, leaving the current building shorter than its neighbors. During the years surrounding the start of the Great Depression, it was vacant. In 1936, A. J. Whitley purchased the building, and relocated Fulton Conway & Company, an automobile accessories business, from a location a few doors west on Main Street. In March 1974, the 800 block of Louisville’s West Main Street was listed on the National Register of Historic Places.

On February 23, 2008, under the leadership of President General Bruce A. Wilcox, the SAR general officers, vice presidents general, and trustees voted to take the first step to relocate the SAR national Headquarters to West Main Street in Louisville. In October 2010, the Genealogical Research Library began operations in its new facility on West Main Street, with the full transition of the Headquarters to its current location occurring over the summer months of 2014.

Interested visitors may also use the Google Maps below to arrange their travel plans to the SAR Headquarters and Genealogical Research Library.