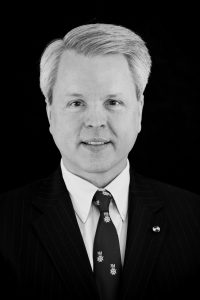 In his own words: “I am humbled, grateful and honored to have been elected as President General for 2013-14. I pledge to you all that I will dedicate my life this year to fulfilling the mission of the Sons of the American Revolution, to preserve the memory of those heroes who established the independence of the United States and secured the liberty of her citizens. Let me briefly review some items I’d like us all to work on this year. The Patriotic Education Committee has been renamed and refocused. It is now the Education Committee. Its primary purpose is to disseminate information about the education programs in the various state societies and what the state societies are doing to reach elementary, middle and high schools. Larry Stevens of the Texas Society chairs this committee. The Young Members Committee has been re-established. Some young members have informed me there is a need for such a committee. Mike Elston of the Virginia Society chairs this committee. At the recommendation of Col. Chuck Sweeney of the Florida Society, a Vietnam War Veterans Corps has been established as part · of the Veterans Recognition Committee. This Corps is similar to the one previously established for World War II and Korean War veterans and will be chaired by Col. Sweeney. Finally, I am adding the USO to the list of organizations with which the Patriotic Outreach Committee is charged to foster cooperative arrangements, along with the American Legion, Wreaths Across America and Blue Star Salute. I’m establishing a special task force to encourage this partnership with the USO. Dan McMurray of the Missouri Society chairs this task force. I have devised five President General Initiatives for 2013-14. Hard copies of these were distributed at the Installation Banquet. These also have been posted on the SAR website and are printed in this edition of the SAR Magazine, beginning on page 14. I understand that five President General Initiatives may seem like a lot. It is not my intention to overwhelm you, but to give you meaningful choices. I do not expect every state society, chapter and individual compatriot to pursue all five of these initiatives. But I hope-I ask you all-to pursue as many of them as you can in the furtherance of the goals and objectives of the Sons of the American Revolution, and in honor of our patriot ancestors. May the Lord bless you all. May He bless the SAR. And may He bless the United States of America.”