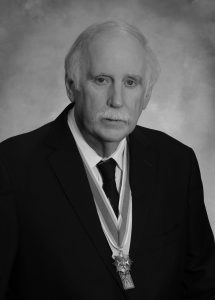 Compatriot Manning is a resident of Scituate, Massachusetts. His formal education includes Bachelor of Science degree in Elementary Education along with a Master of Education, Computer Information Technology. He is also a Journeyman & Master Electrician (MA & NH) and an Electrical Instructor at Quincy High School. He and his wife Sheila have two daughters and two granddaughters. Compatriot Manning joined the SAR in 1994 and has held several positions at the Chapter, State and National levels, along with several National Committees.

In his own words: “I am honored to represent you as the 116th President General of the Sons of the American Revolution. The President General is the face of the national society and travels across the country to attend the many and varied events at the district, state and chapter levels. This, I believe, is one of the most important tasks of the President General. All the good work of our society begins in our own communities. Grave markings, parades and school programs, to name a few activities, shine a spotlight on our mission. These events, held at the local level, are what defines the SAR and educates all who attend them. I look forward to representing the SAR across the country at these events. Being there will let those who plan and implement these programs know that all their hard work is appreciated and recognized at the national level. Since becoming a member of the SAR, I have been very involved. Starting at the state level, I have served as state secretary, president and national trustee. I also had the honor of serving as VPG of the New England District. Once I became active at the national level, I served on several boards and committees. Many of you may know me through my daily history messages. I have always been passionate about history, and discovering that my ancestors played a role in the fight for independence has enriched my life in so many ways. To be able to stand here before you as President General is humbling. I hope to expand on the good works of those who served before me and carry on the mission of the SAR. I would like to thank the staff of our National Headquarters. They are the folks who keep the organization running efficiently on a day-to-day basis. Many of us interact with the staff only briefly at Congress and Leadership; however, as a general officer serving in different capacities, I have seen firsthand their dedication and hard work. I would also like to thank Steve Vest for his outstanding work on The SAR Magazine. To those general officers I have served closely with these last few years, I thank you for the time and effort which you put into your position and the teamwork that has served the society so well. To all committee members, thank you for stepping up to serve and work on these important boards and committees. I cannot emphasize enough that the SAR would not work if not for all the volunteers who share their time and talent. It is not about any one person; it is about the membership as a whole. Thank you to David Perkins, recording secretary, for his outstanding work this past year. This last year, it has been an honor and a pleasure to work with President General Warren Alter. Warren has worked tirelessly for the SAR and has accomplished a great deal this last year alone. If you have read your SAR Magazine during his tenure, you know how far we have come. I could not follow a more dedicated and passionate leader than Warren. He and I have been on the same page regarding many issues, the main one being carrying out the support and vote of the trustees to continue the work on the Education Center and Museum. PG Alter has kept the lines of communication with the general officers and VPGs open, and I will continue with that practice as well, with teleconferences between Leaderships and Congress as needed. I recall, when I was a new member of the SAR, the then-President General visiting Massachusetts for one of our events, and how important his presence was to the compatriots who attended. It is that which I look forward to the most—meeting the membership in their home states and participating in their events and, as I said earlier, representing the National Society. When I joined the SAR, I did not know what to expect. I knew I wanted to become an active member, but I did not envision being involved beyond my state and chapter. That was 25 years ago. In those 25 years, having taken on the duties that brought me to a Leadership meeting and a Congress, I was hooked. It was the people we met, and the friendships that developed, just as much as the work we were doing that kept me coming back year after year. It has enriched our lives. I also want to thank the California Society for all the work they have done to make this Congress such a success. I look forward to seeing many of you along the way this year in my travels, and making new friends, as well. We ask that you keep us in your prayers for health and safe travels—and, while you are at it, for a mild winter and no flight cancellations due to snow!”